It was 10 Years Ago Tomorrow

It was August 11th 2002 that we lost our good friend Tony Naikelis, when you're out riding your bike tomorrow think about the guy who did so much for the local mountain biking community. Take a second to reach out to a rider you don't know, say "hey dude" with a smile,Tony would have wanted it that way.
A memorial ride is being planned for the middle of October in Omaha 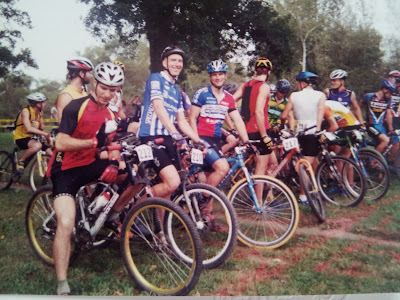 The photo above was taken at the annual Sugar Bottom Scramble in Iowa City, it was my first Cat 1 MTB race, Tony had been out drinking until 5:00 a.m. and still finished fifth, he then slept in the back seat the entire four hours home. Pictured in the blue jersey is Mike McGrath.

I miss you buddy.

Good to see you get the W at Swanson on 10 year anniversary. I remember he was soaking wet when he got back to the room. He had hooked up with a wedding party at the hotel and took it into overtime.

thanx Shim and Mike.gonna make it back to the big O for the memorial ride.wow! all the fun Tony stories poppen up in my head right
now.

I really admire the ethos you describe: "Take a second to reach out to a rider you don't know, say 'hey dude' with a smile, Tony would have wanted it that way."

We need more of those kinds of cats, not less. I'm sorry I never knew the man.

Our loss was your loss.

Thea, thanks for checking back with us. Hard to believe its been ten years. It's still pretty rare that I get on a mountain bike without thinking about your brother. I still remember him helping you with your math homework when you were in high school.

Welcome to MTB Omaha, news and info about the cycling community in and around Omaha, Nebraska and around the world. Comment on posts as you wish. If you are interested in becoming a contributor to the scene, send me an e-mail to 2mod(at)cox(dot)net.